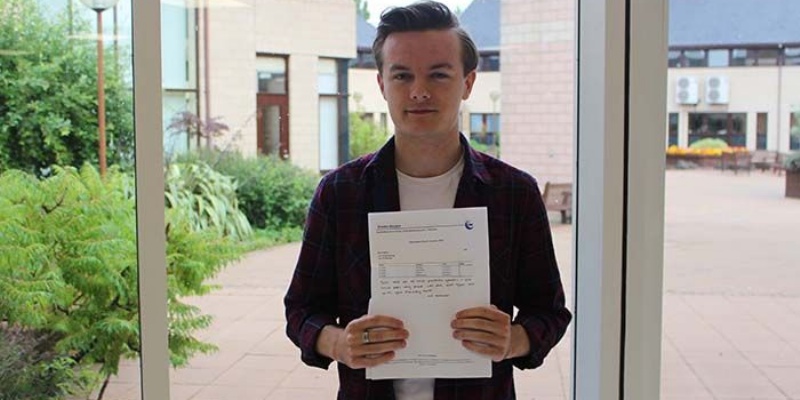 Well done to all of our students who are celebrating their hard-earned A Level results. Here’s what a few of them are doing next:

James Walker is going to study Computing at Imperial College London after gaining A*s in Chemistry Maths and Physics and an A in Further Maths. He said ‘I feel good I have got better grades than I expected. I’m going to study Computing, as I want to be a Software Engineer, something I have always been interested in. I got my grades through making notes from my text books, memorising everything and using flash cards and past papers. I recommend using flash cards, as they were really helpful. Some of the exams were hard and some were easy. It was hard because they were new A levels this year so there were no past papers to go over, so to have achieved these grades is something I am extremely proud of.’

Ross Ward will study Biological and Medicine Chemistry at York University after gaining A*s in Biology, French and Maths and an A in Chemistry. He said: ‘I am feeling very good as I got better results than I expected, I needed A, A, B so to achieve even better than that is fantastic. I did a lot of past papers and studying. I plan on doing pharmaceutical research when I finish university. It took me a long time to

figure out what I wanted to do, I researched a lot of courses and changed my mind a few times but I’m very excited with my final decision. I am extremely happy with my French grade, I enjoy speaking French and although I am not studying it at university I do plan to still use it so I don’t forget everything I’ve learnt.’

Nayan Kumar is celebrating after gaining A*s in Maths and Further Maths and A’s in Physics and Chemistry. He is now going to study Mechanical Engineering for four years at Bath University. He said, ‘I honestly couldn’t tell you what results I thought I was going to achieve. I found the exams tough I guess, I don’t know, you come out of them and think it’s done and move on to the next one. I try not to analyse them too much. I made a policy not to talk to anyone about tests as I think you

just need to try your best and move on. I’m really excited about studying Mechanical Engineering, as I want to be an engineer. I might like to work in some kind of science field but I’m not sure yet and I’m open to see what will happen over the coming years.’

Isabella Aves is going to study English Literature at Birmingham University after gaining A*s in English Literature and BPE and an A in History. She said, ‘My grades were much better than I thought as I didn’t think that the exams went very well. I am a little bit in shock to be honest. I revised pretty much non-stop until the exams and I am so happy with my results. I want to go into publishing after university as I’ve always loved reading so I’d like to be part of making books.’

Mack Lilley is over the moon with his surprise results of A*s in Physics and Maths and an A in DT, although he has been offered a place at Loughborough University to study Electronic Engineering he may now consider other options now his grades are much higher than expected. He said, ‘I am so happy. I have done so much better than I thought I was going to do, better than I could ever have imagined to be honest. I thought trying to gain the A and two B’s that I needed for my course was being optimistic! I didn’t believe I could get there because last year I got a two C’s and a D in my AS grades. That gave me the wake up call I needed and I didn’t stop working all year to get these grades but the hard work evidently paid off! I think because I have done so much better than I

thought I may look to change universities but I have no clue where yet as I didn’t ever comprehend that I would be able to get grades as good as this. I am so shocked but extremely happy.’