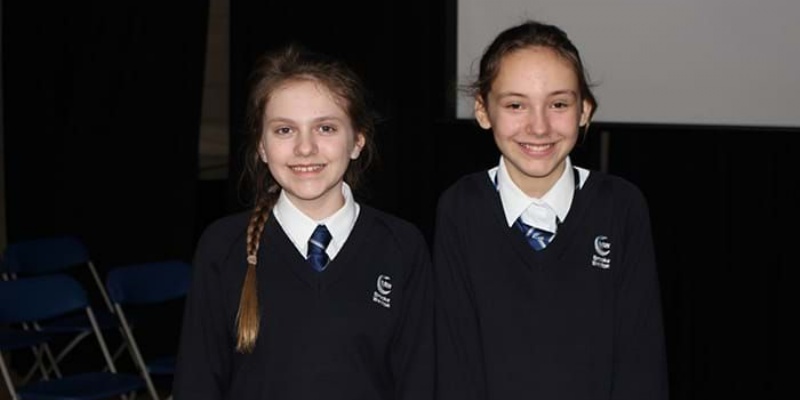 We are delighted to announce the three winners of our Trust ‘Believe Big’ competition are 7E’s Robot Dog, 7B’s Crystal Clear and 7R’s Homeless token bench.

The winners will represent Brooke Weston Academy together with the four other Trust schools at the grand final at Rockingham Speedway on 20 March. All of the groups will receive certificates, T-shirts and goodie bags and will be asked to create a stall to showcase their work to the judges. The overall winning idea will be turned into a children's book and go live on Amazon.

blind. They said, ‘We are really excited that we have made it through to the final and didn’t expect to win at all. We cant wait to represent the school in the final, although we feel a little bit scared and nervous we are so happy and excited and think that the judges will love our Robot Dog idea.’

Anna Waterhouse Evie Lapsley and Ruby Broad came up with the idea of a token bench for the homeless, which would provide essentials such as food and sleeping bags. They said, ‘We are so excited and so happy. It is an amazing feeling and we just really want to win now. We feel like our idea is the best and will make a big improvement to the world so we have a really good chance of winning.’

Jasmine Bailey, Tyler Green, Catherine Darroch and Sofia Muhammad thought of the idea of a water purifier to help with the drought in Cape Town. They said, ‘We felt like our idea would take us through to the finals because we think that it will make a really big difference to the world and so we were extremely confident. Even though we did think we might win we still feel really privileged that we have made it through to the finals, as there were so many good ideas from the other teams that could change the world just as much as ours could but we still think ours is an amazing idea. We are going to get a new model for the final and work on using different materials to portray our idea in the best possible way. We are all very excited.’

Senior Vice Principal Mr Shaun Strydom said, ‘We were extremely impressed with all of the fantastic ideas that the students created and it took us a long time to decide on the final three as they are all worthy winners. We wish all of the three finalists the best of luck against the other Trust schools in the final and with the concepts that we have we are sure that we will come back victorious.’