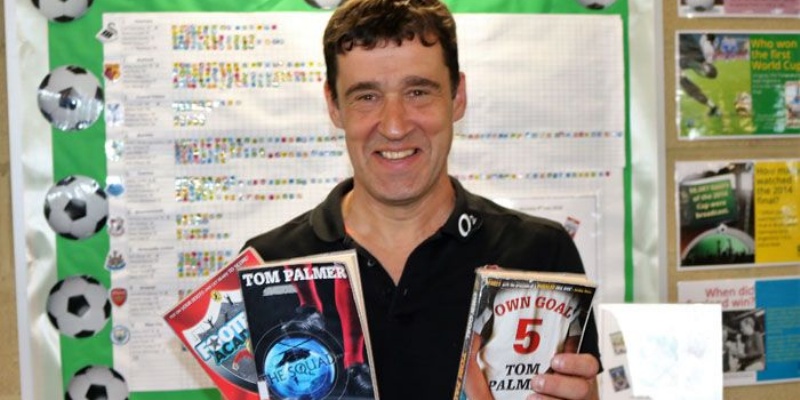 Author Tom Palmer spoke to Year 7 and 8 students at Brooke Weston Academy about his love of sport and his writing career.

Tom has been a full time writer since landing a book deal ten years ago. He combines sports related stories with different elements, including spies, detectives, ghosts or history to give a twist on traditional sports novels, and he has also written for adults and prisoners.

Tom said: ‘I write on trains, in cafes, anywhere. I am writing a live story during the World Cup with a new episode each day so it is constantly changing. I had been writing for 20 years without getting published but I knew I was getting closer to the target and my ambition drove me on. I like writing so would do it for pleasure anyway.

‘My first book, Foul Play, got rejected by 17 publishers. Then I discovered a literary agent who supports Leeds United, the same football team as me. Six weeks later I had an eight book deal with Puffin! My writing career went from a shut door to ‘here’s the world’. It felt great. They commissioned a detective series and a straightforward sports series, so then I became a full time writer.’

Tom, who writes for children aged from 5 to 15, has since sold around 400,000 books and he also does up to three school visits a week. It can take anything from a fortnight to four months to complete his books and he travelled to Ghana to conduct research for his most recent one, Offside, about trafficking and Fair Trade.

Tom said: ‘The best thing about being a writer is that I get to pursue my obsessions with history or sport and I get paid to do my hobby! It also promotes reading for pleasure and I often get messages from parents saying that their child only really enjoyed reading once they had read one of mine. When I see children reading in public I always have a glimpse to see if it is one of mine!’

He presented medals and trophies to the Year 7 teams who finished in the top four of the Library’s Premier League Reading Challenge. The students teamed up to read as many books as possible with Burnley (comprising Walter Mudzinganyama, Jake Wilson, Luke Miller, Austen Mitchell and Jack Gibson) coming top. Walter also received a prize for reading the most books – 66 since the competition started in September.

The visit was organised by Librarian Wendy McCabe. She said: ‘Tom was very popular with the students and his visit was made livelier with the addition of a penalty shoot-out with students! He also did a writing workshop with Year 7 students so it was an action-packed day.’

Literacy co-ordinator Lauren Fitzjohn said: ‘It was a really successful visit and the students were really engaged with Tom’s approach to reading and how you need to read what you love. He inspired them to think about reading different forms and make reading part of who they are.’