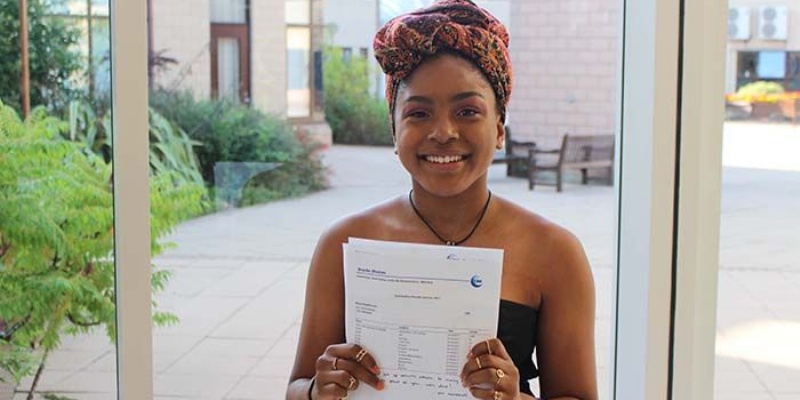 Here’s the second in our series focusing on GCSE success stories:

Nkara Stephenson was celebrating her seven A*and three A grades. She said, ‘I’m super happy with my results, especially my Maths and Geography as I really wanted A* in those. I made sure that I stayed focused and revised instead of watching TV and going on my phone I would have to put it aside sometimes to make sure that I concentrated on my work. I am going to take Music, Drama, English Literature and Philosophy. I would like to study Music in the future and sing professionally.’

Tapuwa Chitiga achieved eight A* and three A grades, he said “I did really well I’m extremely proud of my

Geography to be honest, because I got a B in the mocks and I came out with an A*. I put in a lot of hard work, stayed after school and the teachers really helped me out. I’m proud of my 9s, in English and Maths as I was a bit concerned during my exams that I might not have achieved them so I’m really happy that I did. I put a lot of pressure on myself for my Further Maths exam so to have gained the highest mark I could have is fantastic. I will be studying Further Maths, Biology, Chemistry and Maths as I want to do something in Maths or Science in the future.’

Joel Wallis gained three A*s and six As. He said, ‘I’m extremely happy with my results, I wanted to get

slightly higher in English Literature but I knew that it was my weaker subject in English, so I am pleased with the six that I achieved. I studied really hard and made sure I paid attention in all of my classes. I am staying here to study Computer Science, Physics, Maths and probably History. I would like to go into Game Design or Computing.’

Sophie Coull was celebrating after achieving three A*s and seven As. She

said, ‘I did really well and I am happy with my results. In year 10 I was off school because I was ill for a term and a half so these results are amazing. Before I was ill I was predicted mostly A* then it went down quite a lot when I was off so I’ve had to work really hard to get my grades back to where they should be. I’m going to study Biology, Chemistry and Maths and a fourth subject that I am not sure of yet. I think id like to do something in Medicine or Biomedicine in the future.