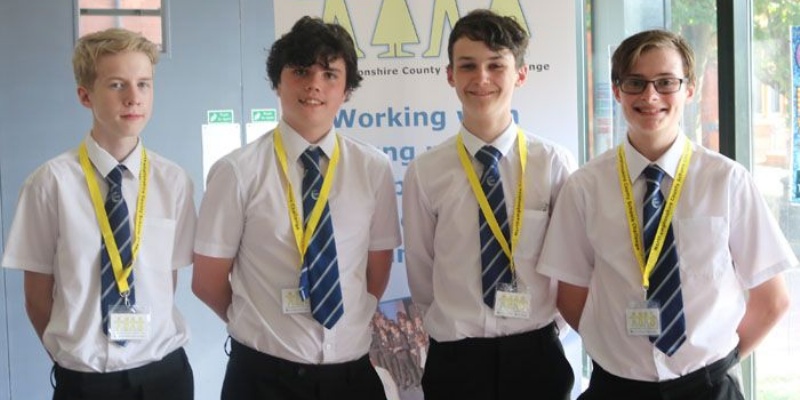 Well done to the team from Brooke Weston Academy whose innovative idea to develop a road safety app won them a place in the final of the Northants County Schools Challenge.

The competition is run by Northants Police and Fire Service and each year they challenge schools to come up with innovative ideas to tackle a topic that is relevant to young people. This year’s focus was on road safety.

Three Brooke Weston Trust schools got through to the final stage, with a team fromCorby Business Academy developing teenage friendly reflective clothing while a trio from Corby Technical School produced a ‘Be Sensible’ rap which is available on YouTube and has been promoted on local radio.

The event at Castle Theatre, Wellingborough, was hosted by PCSO Alex Franklin, a familiar face in many of our schools, and the judges comprised Chief Constable Simon Edens, Chief Fire Officer, Darren Dovey, Lesley Hagger, the Director of Children, Families and Education for Northants County Council, Louise McCann, General Manager of Northamptonshire Highways and Stephen Mold, the Northants Police and Crime Commissioner.

Each had the opportunity to question the teams on their products and they had the difficult task of picking the overall winners. Congratulations to Southfield School, Isebrook SEN and Corby Business Academy who were awarded the top three places, with money awarded to each team to implement their ideas.

The judges commended all their teams for their efforts and said that by getting through to the final stages they were all winners. The focus of next year’s competition will be knife crime.

Brooke Weston teacher Adam Marriott said: ‘Well done to our team who gave a confident and memorable presentation. There was very stiff competition but to have made it through to the final stage of this hard-fought competition is a great accolade and shows what an innovative idea they had.’