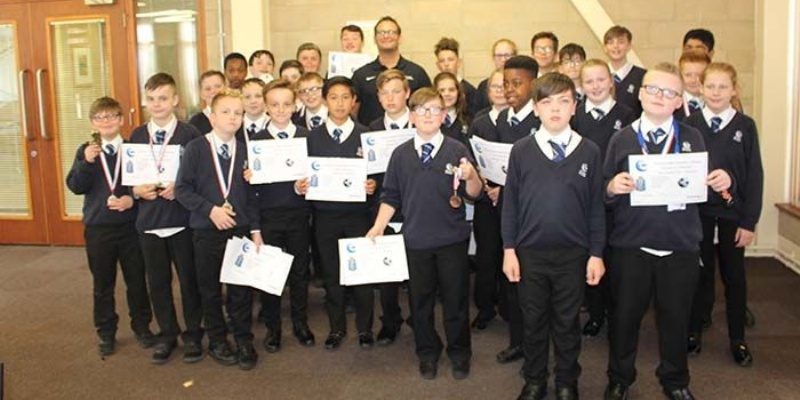 Best selling novelist Dan Freedman visited Brooke Weston this week to speak to students about his career and host a creative workshop for a group of Year 7 students.

Dan is the best-selling author of the Jamie Johnson series of books which have sold over half a million copies and have also been adapted into a TV drama for the BBC. Dan started off his career as a journalist and has worked with the England Football Team as well as having interviewed players such as Ronaldo and Messi.

He spoke to all students in Years 7 and 8 about his books and his career and delivered a creative writing workshop to a group of Year 7 students. The students had prepared for Dan’s visit by completing work in their English lessons on his book ‘Skills from Brazil’

At the end of his talk, Dan, along with the BWT CEO Dr Campbell, presented medals and trophies to the winners of the Year 7 Premier League Reading Challenge which began back in November 2016 with 11 teams taking part. The aim of the competition was to read as much as possible and score goals by doing so for their team. Special trophies were awarded to the Manager’s Player; Joel Ayears, who showed dedication and team work throughout the challenge. The Top Goal Scorer trophy went to Joshua Prudence with an impressive 79 goals scored for his team. Finally the 2017 Premier League Reading Champions, Leicester City, were presented with their team trophy.

Librarian Ms Wendy McCabe said ‘Dan’s visit has been inspirational for the students. He is such an interesting character and has inspired the students with his stories. Although his books are primarily

about football they are also stories about family, friends and chasing your dreams, whatever they may be’

Dan said ‘I was really bowled over by the attention that everyone paid in the talk as there were a lot of people there and they were really engaged and their questions were excellent. In the workshop the quality of the writing and the fact that they all enjoyed doing their own Jamie Johnson story was fantastic, a lot of hard work had clearly gone in to setting it up and hopefully it paid off. I thought it was very memorable and hopefully something that the students can go away with over the summer and take something constructive from it.’