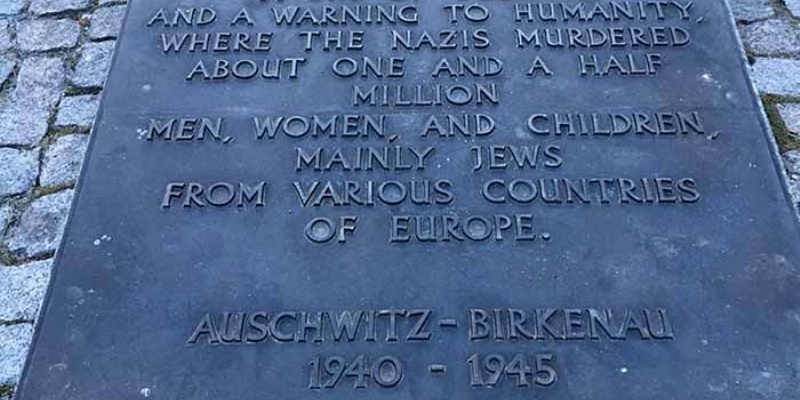 Two Year 12 students, Brooke Gray and Albert Nyarko-Agyei, visited Auschwitz as part of a project organised by The Holocaust Trust to educate them on the Holocaust and the lessons to be learned from it today.

The Holocaust Educational Trust was established in 1988 and works in schools, universities and the community to raise awareness and understanding of the Holocaust. They run an annual project taking more than 200 students from 16-18 years old from secondary schools and colleges across the country to Auschwitz in Poland.

The Holocaust was the mass murder of six million Jews and millions of other people leading up to, and during, World War II. The killings took place in Europe between 1933 and 1945 organised by the German Nazi party which was led by Adolf Hitler. The largest group of victims were Jewish people where nearly 7 out of every 10 Jews living in Europe were killed.

During the visit students were taken to Oświęcim, the town where the Auschwitz concentration and death camps were located and where the local Jewish community lived prior to the start of the Second World War. The groups were shown several barracks at Auschwitz I – registration documents of inmates, shoes, clothes and other items seized from the prisoners as they entered the camps. They then travelled the short distance to Birkenau, the site that most people associate with the word “Auschwitz” and where the vast majority of victims were murdered. The tour of Birkenau culminated in a memorable ceremony held by a Rabbi next to the destroyed crematoria.

Brooke said ‘One of the most touching things we saw whilst we there were the cabinets of hair, there were just thousands of ponytails which had been cut off the prisoners when they arrived at the camps and their heads were shaved. They took their clothes and stripped them of their humanity and took away their individualism. It was like everyone was just a body.’

Brooke and Albert plan to visit all of the primary schools in the Trust to begin teaching the students about the holocaust at an early age as well as holding a school assembly to explain their experiences to their peers and wider community.

Albert said ‘When you think of the holocaust you think of the 6 million figure you don’t think of a little girl that was taken away from her mother and killed. I think it’s about humanising an event that the humanity is lost from. I studied the holocaust for a long time in GCSE history but I didn’t feel like I properly connected with it. I wanted to experience it for myself as I couldn’t believe it and truly understand it until I saw it with my own eyes.

‘I’ve learnt that we need to do more to educate people, we need to humanise the subject of the holocaust and mass killing and that it is not acceptable. I think it’s not just about showing people what happened to the Jewish people it’s about spreading the message that we need to treat people equally.’

Brooke said ‘I wanted to take part in this project as whilst I was studying Anne Frank and reading her diary I realised she was just a normal girl who had insecurities and liked boys just like me and I could relate to her and I felt that it could have been me and that’s when it really resided in me that this was the murder of 6 million people who were just normal people like us and it could happen again. I wanted to become a part of it and now I feel compelled to spread the message and pass on the knowledge that we need to be more accepting of other people.

‘In todays society people and the government don’t want to take action because they don’t want to cause problems for themselves. I want to show people that we do have a voice and if we come together to speak then we can help to prevent the things that are going on in the world today that we feel like we have no input in but we actually do. This project really was life changing and has made me see everything from a different perspective.’

As a result of participating in the Project, Brooke and Albert will now become Holocaust Educational Trust Ambassadors within the community, raising awareness of the Holocaust and challenging prejudice and racism today.