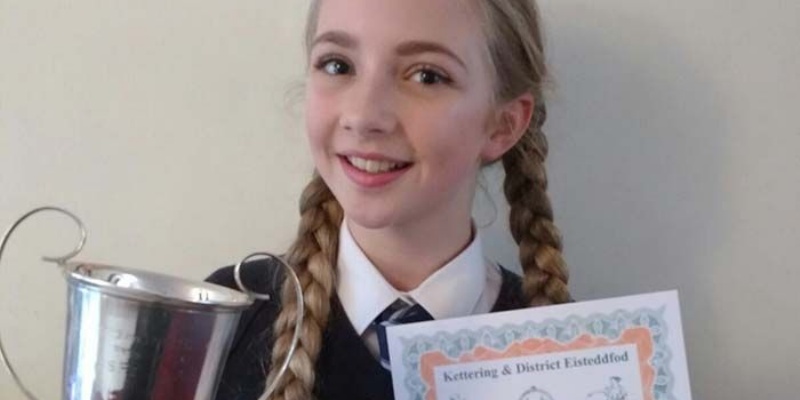 Brooke Weston student Daisy Oram competed in the Kettering and District Eisteddfod competition, an annual festival of music, speech and dramatic arts for amateur performers where she was successful in winning the A S Felton Cup in the 13 Years and under cornet Recital Class.

Daisy practices the cornet five times a week and had to fight her anxiety issues during the competition when on the first day she became too nervous to compete but managed to overcome her fears and came back the next day to win. She said ‘The first day my anxiety got the better of me and I wasn’t able to play at all. I went back on the second day feeling scared and worried that I wouldn’t be able to play or I would go wrong. I played two different pieces tried my best to keep focused and won. It felt amazing, I was shaking I was so happy.’

At just 11 years old Daisy has been playing the cornet for five and a half years after her family’s love of music developed her interest in the instrument. She now plays together with her two brothers and parents in both the Gretton Silver band and Corby Silver band where she competed in the Oxford Area contest and as a result of her performance, was invited to contest the Midland Regional Area Championships with Corby Silver Band in March. The band succeeded in winning the competition for the first time since 1962 and as a result will be going forward to the National Championship Final in Cheltenham in September.

Daisy said ‘I enjoy playing in a band with my family it’s fun and feels like we are working together as a team which has bought us closer as a family. I love playing the cornet as it’s like an escape for me, I can focus on the music rather than what is going on around me, all my problems and troubles just disappear when I start playing.’

Gretton and Corby Silver Bands both welcome and encourage young players anyone who would like the opportunity to play in a full band. For more information about joining please use the links below.