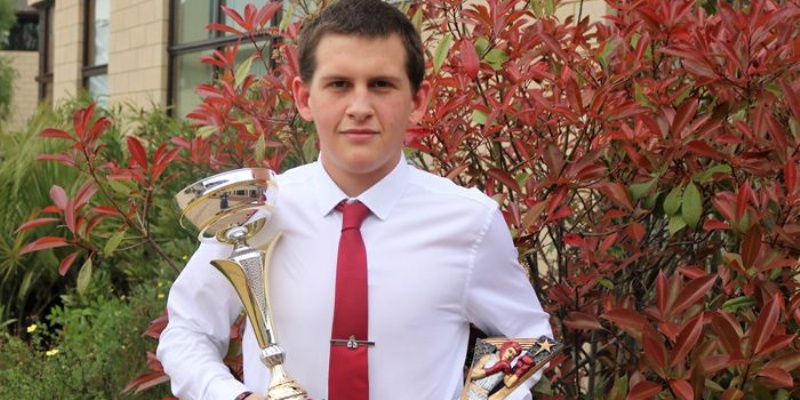 Sixth Former Shaun Morton has a growing reputation in amateur boxing circles and recently won a bout against a former national champion at Finchley, the club where world heavyweight champion Anthony Joshua started his career.

As well as winning his match and a trophy, Shaun was awarded the ‘Visiting Boxer of the Night’ trophy for his technique and spirit.

Shaun has only been boxing for two years and has had 13 fights, winning six. It has been a hard apprenticeship and he has learned determination and discipline, honing his technique and setting his sights on becoming a professional.

He said: ‘I used to play football but got injured so thought I’d give boxing a try. I went to the club at Kettering and fell in love with it. It teaches you respect and discipline and keeps you incredibly fit which motivates you to keep going.’

Shaun trains under coaches Hughie Dunbar, Chris Wallace and Dave Wallington and the first thing they do is work on fighters’ fitness levels before letting them in the ring: ‘The first time I sparred they partnered me with the best kid of my age. There was a lot of defence in my first sparring and not much offence. It depends on how you react as to whether you are built for the sport or not.’

It took around five months for Shaun to get to the standard where he was invited to take part in a ‘home show’ where visiting boxers from other clubs came to fight: ‘The show is completely different, when you get in the ring for the first time and actually fight somebody it doesn’t matter how many rounds of sparring you do, nothing prepares you for the fight, especially in the amateur game, because you know nothing about your opponent, so you have to get in there and figure them out in the first 30 seconds. I didn’t have it easy in the first one, the lad weighed in much heavier than me and had been training a lot longer. It took me to my third fight before I got a win. At my level when you are only doing three rounds of two minutes you have only got six minutes in the ring so you have to really got to go out there and give it everything.’

Shaun has faced tough opposition including an opponent who had won 30 of his 40 fights with 16 stoppages by the referee: ‘I had only had 10 fights so he had a lot more experience than me, but win or lose I take it all as experience and treat the amateur level as my apprenticeship. I want to move up into the professional ranks, that is the dream.’

‘When I went down to Finchley ABC I had just come off a losing streak, so to go to north London and beat a lad from one of the best clubs in the country has given me that boost. It has really motivated me for next season. I turn senior next year so I’ll be fighting people aged 18 to 40 years old.

‘I have fought on the national level but haven’t been a national champion yet, but at Finchley I beat an ex-national champion from last year. He came in with confidence, hit me with everything that he had and couldn’t get me off him. That boosts my confidence, even though I am levels below these opponents experience-wise the coaches are putting me in the same category because I am able to mix it with them and I am learning from them.’

Shaun, who is 6ft and boxes in the super welterweight or light middleweight categories, was one of 18 visiting boxers taking part in the event at Finchley, so to be awarded ‘Visiting Boxer of the Night’ was a great achievement and shows that his talent is being noticed.

He is currently in Year 12 studying sport, health and social care, IT and business and wants to become a PE teacher while pursuing his boxing dream. He counts Mike Tyson as his ultimate boxing hero and recognises how boxing has changed him for the better: ‘Before boxing I was naughty and didn’t respect anybody so it has taught me respect and discipline. When you win you get an adrenaline rush it is the buzz of achieving. You don’t just do it for yourself, you do it for your club and coaches. We win as a team and we lose as a team and we rebuild from it. You have got to learn to take your losses on the chin and that shows more about a person if you can take the losses and change them into a positive than if you just lose and give up. It’s about perseverance. If I win or lose I’ll always entertain, so I’ll always give the spectators a good night!’