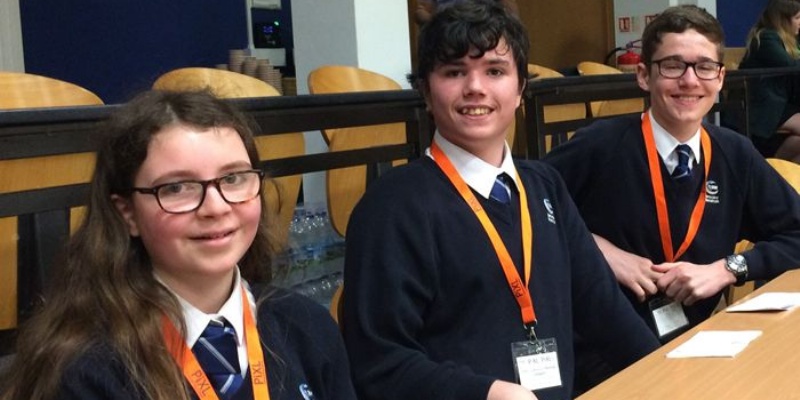 Well done to our Year 9 students who were placed fifth out of 28 teams in the regional heats of the PIXL ‘Up for Debate’ competition, the first event of its kind they had competed in.

Jasmine Clifton, Dylan Lewis-Creser and Daniel Nicholson, took part in three debates; the first two were pre-planned on taxing junk food and returning cultural treasures to their country of origin. The third, an ‘impromptu’ round, was a debate about banning boxing that the team had just 20 minutes to prepare for. They won the first two but were beaten in the third debate by the team that went on to win the heat.

The Brooke Weston Academy contingent was awarded a certificate for being a ‘top ranked’ team and Daniel and Dylan also received ‘outstanding speaker’ certificates, which were awarded only to 11 participants at the competition, which was held at Northampton University.

Debating has been embedded into the Year 9 English curriculum and an after-school club on Tuesday is led by Senior Assistant Principal Mrs Rebecca Waterson. She said: ‘Debating is a fantastic way for our students to develop key analytical and communication skills. Our students did brilliantly - they worked well as a team and showed amazing courage and spirit during each round, I was so proud of them.’