Profile of our Head Boy and Head Girl 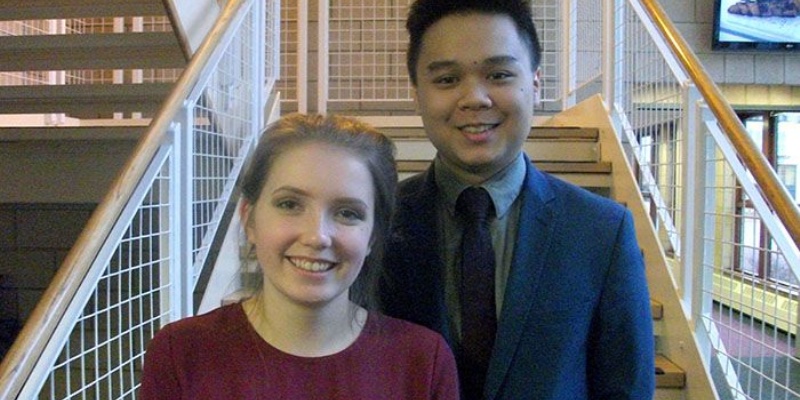 Kelsey Fordyce and Sam Tran have recently been appointed as Brooke Weston’s first ever Head Boy and Girl. Head of Sixth Form Mrs Smith asked for written applications and the top candidates were interviewed with Sam and Kelsey being awarded the prestigious roles.

‘When I came here I really liked it, everyone said to me that the teachers were really good. They are thorough in their subjects, engage with the class and always answer any questions that you might have.’

Kelsey is studying maths, further maths and business and also studies AS level additional further maths independently. She has applied to university and would like to become a maths teacher. Although extremely busy with her studies, Kelsey is excited about her new role.

‘I like the idea of being a role model to others. I really want to make the role my own and bring my ideas to it as it’s something that has never been done at Brooke Weston before.’

As Head Boy and Girl Kelsey and Sam will work together with the deputies on faculty link, ambassadors, events and fund raising committees.

Kelsey said: ‘I want to help out with the school and improve as much as I can for the students. If anyone has any problems or worries I want them to be able to come to me and I will get things changed if I can. I’m very persistent and will keep persevering.’

Sam joined Brooke Weston in Year 10 on an exchange year from his home of Hannover in Germany, but ended up staying. Three years on Sam, living with a host family in Corby, says he prefers England to Germany.

‘I really love living in England and coming to Brooke Weston. I have lots of fun here. I do miss my family, but I’m used to it now and can see them and speak to them on social media. Society in Germany is very different to England.I love how English people are so friendly and hospitable.’

Originating from Vietnam, Sam has parents and an older sister in Germany and speaks German, English and French. He already has an A* in German A level, which he took for ‘fun’ last summer. Sam is studying maths, further maths and French. In his final year, he has applied to university and hopes to get into Oxford or Durham to study maths and economics. In the future Sam hopes to work in investment banking specialising in equity research.

Sam said: ‘I wanted to be Head Boy as I had a lot of ideas about the things that I want to do at the school. I wanted to give something back to the Brooke Weston community as they have always been really friendly and patient to me since I came here. They have given me the opportunity to stay here, which I think is fantastic. It’s such a unique experience that is invaluable for me and I want to help the school in every way I can to maintain its reputation.’

‘I already have ideas about things I’d like to put in place. I want to get a representative from every year and meet up every second week to see if they have any problems, that I can help with or speak to relevant people about. I would also like to feed back information to the school in assemblies.’

With many students applying for the role, Sam thinks there is a reason why he stood out:

‘My main selling point is that I can precisely communicate. I say things directly and have a high level of proficiency. I don’t make decisions based on friendship groups or what a teacher might say or think. I do what I think is right which is what a Head Boy should do as a role model to the students.’

In his spare time Sam has founded an engineering society for the Sixth Form and they are working towards their Gold Crest award. He would like to help more students start their own club or society at the school.

“If there are things that I can’t do or haven’t done before I want to do them. I’m always trying new things. At the weekend I decided I wanted to learn magic, so I got a pack of cards and taught myself.’

Congratulations to both Kelsey and Sam on their appointments as Brooke Weston Academy's first Head Girl and Boy. They are hard working and conscientious and together with the deputy Head Boys and Girls will make a real difference to school life.