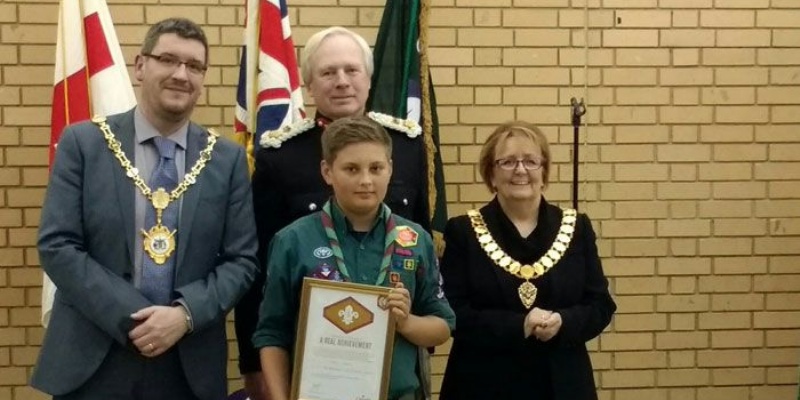 Congratulations to Year 9 student Max Oram, who received his Gold Chief Scout award at a ceremony attended by the Mayors of Corby and Kettering.

He needed to complete nine challenges in categories including teamwork, adventure, skills and community, which involved him spending two nights at the Millennium Green in Desborough planting new trees and shrubs.

Halfway through the physical challenge disaster struck as Max broke his arm meaning that he was unable to complete it. The badge structure also changed so he had to complete more challenges to earn the award. Undeterred and determined, he went on to win a further three badges, making twelve in total and was presented with his award at a ceremony at the John Lowther Centre in Kettering, also attended by the Lord Lieutenant of Northamptonshire.

Max said, ‘When I first joined the Scouts, an older friend that I looked up to received the award and, from that moment, I knew I wanted to complete the challenges to win one of my own. I feel really proud of myself that I achieved my goal and persevered even when I felt like giving up.’