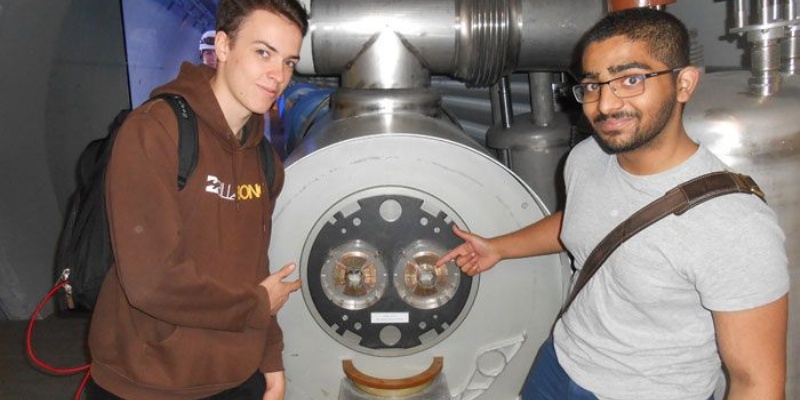 A team of Brooke Weston students visited the world famous site at CERN, toured some of the facilities and spoke to scientists who work there. The trip covered sites in both Switzerland and France as experiments at CERN run across both countries with the Large Hadron Collider spanning a 27km circumference across the border. Students also had free time to explore Geneva’s shops, museums and restaurants, as well as the headquarters of the International Red Cross.

Year 13 student Nayan Kumar said: ‘We were given research to complete before we went however, if you are interested in physics, you naturally know a bit about CERN. We took a tour around CMS and went around the museums to learn more about CERN and particle physics. There are four detectors, ATLAS, CMS, ALICE and the LHCb. CMS is one of the smaller ones and it was assembled in a room like a warehouse! I had never really thought about the scale before. It uses about 160 megawatts of power, which is immensely powerful compared to the energy of the particle themselves.

‘On the first day we went to site where all the engineers work. We talked to two scientists and did the bus tour to France and got a guided tour around CMS and went underground.

During my free time I went to the Red Cross Museum, which had a lot of exhibits including witness statements from children from the Rwandan genocide. It was so harrowing but also moving to hear these human stories.’

Physics student Emily O’Brien said ‘I loved it all, it was the best week of my life, seeing CERN and being there. We were begging Mr Gilyead for this trip and the anticipation has been building up for a year but to be there, see it and talk to the scientists and go around the museums, it was breathtaking.

‘The main language they speak is English but we sat and spoke with two people, one from Italy who did their PHD in France and then came to CERN and one was English and then came to CERN so to hear them talk about their work was amazing and to see the Swiss culture as well. We spent a day in Geneva so my friends and I went to a free science museum that had loads of equipment, like the first ever battery and artefacts from scientists like Coulomb and Volta. The old town was a complete change of culture as it had lots of branded shops; it was stunning and some of the sights were beautiful.’