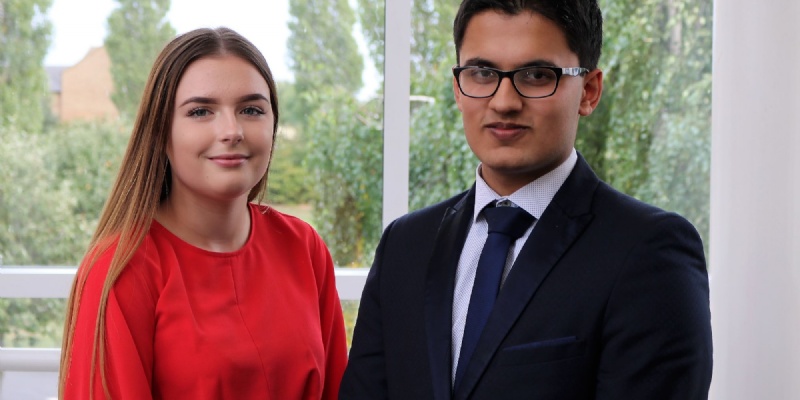 Congratulations to Parasdeep Bains and Milly Simpson who have been appointed Brooke Weston Academy’s Head Boy and Head Girl for this academic year.

The duo had to go through an application and interview process, along with other hopefuls, before landing the roles, which means they are ambassadors for the school and will meet and greet visitors and take part in events including Prize Giving and Parents’ Evenings. Both have been at Brooke Weston Academy since Year 7 and they are looking forward to the challenges of their new roles, which will run alongside their academic studies. Both are aiming for medical careers and so the interpersonal skills they learn will stand them in good stead for the future.

Paras is studying biology, chemistry and maths at A Level and wants become a doctor. He said: ‘In our interview Mr Kirkbride and Mrs Smith asked us to name four ideal qualities for the Head Boy and Head Girl roles. I answered earnestness, integrity, approachability and reliability and I believe I have those. I try to help students wherever I can and hopefully students will be able to approach me and ask me things. I want to be a doctor when I am older so interpersonal skills are good to cultivate at this age.

‘It is a bit daunting but, no matter what job you are in you will have to do something like public speaking so if you practise when you are younger it is a good skill to have. Being Head Boy is a big responsibility and it is quite good for my self- confidence, getting out there and doing stuff you wouldn't normally be doing. I was really pleased to get this role and am looking forward to all the different activities we will be involved in, and making a difference.’

Milly Simpson is planning to be a paramedic and she is studying English language and psychology and CTECs in health and social care and sport. She said: ‘I wanted to apply for the role as it was such a different experience to any others within the school. At first I just wanted to see if I could be considered but it is about making changes and being part of a bigger association. I just wanted to have that responsibility and see where I could go with it.

‘I definitely think that being approachable is the main quality that you should have, because I want people to speak to me about anything. I think you also have to be hardworking, able to communicate with people and work with teams, whether that is on a smaller scale or the whole school scale.

‘I am quite a confident person and I enjoy meeting new people so I am going to enjoy the role. I play netball and coach younger teams and Paras does karate and coaches younger people as well. It does feel like a big accomplishment getting this role.’

Paras and Milly are both doing supportive roles as part of their Sixth Form IEC programme. Paras volunteers at Lakeland Hospice each week: ‘I talk to patients, make cups of tea and play bingo with them. As I want a career in medicine it has made me appreciate the work of the nurses there and it teaches you about the nitty gritty reality of a healthcare career.’

Milly has supported a Polish student in her science lessons at the Academy: ‘I helped to translate some of the worksheets and we would go through them together as she was still learning English, so it was helping her to develop the language and skills, not only in English, but also to learn the science behind it.’

Paras and Milly will be attending special assemblies where they will be introduced to each year group. Congratulations and enjoy your time as ambassadors for Brooke Weston Academy.