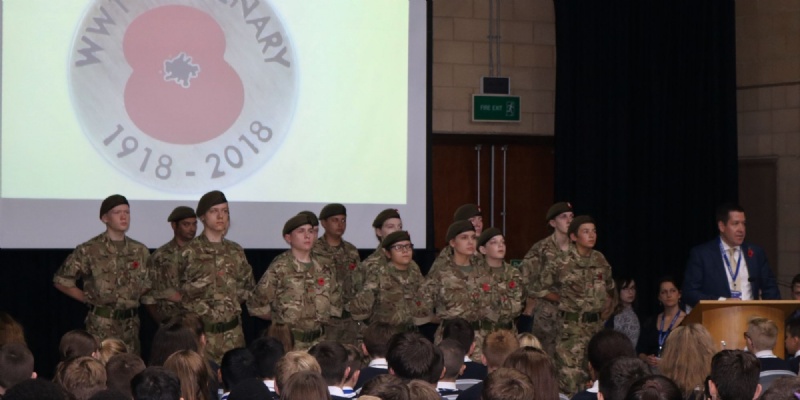 Brooke Weston Academy held Remembrance assemblies to commemorate all those affected by conflict and war.

The Academy’s CCF cadets paraded before Principal Pete Kirkbride spoke about war, with particular reference to the First World War and the Armistice a century ago.

Students saw the remastered and colourised footage of soldiers from the Great War, showing their lives both in and out of the trenches, before Mr Kirkbride spoke about his great, great grandfather, Harry Harrison, who left behind a widow and five children when he was killed in Iraq: ‘He was just one of those 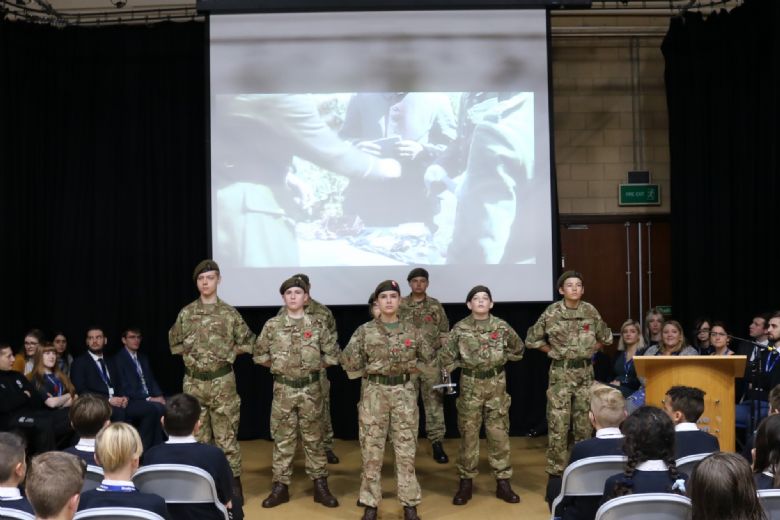 many, many people that grew up in this country and died somewhere very different, a long way from home and the people that loved him.'

He told the students how Pals Battalions, made up of men who signed up together from towns, workplaces, or sports clubs, also died together, mown down in minutes by machine gun fire. ‘It was a war of total attrition, literally tens of thousands of men being killed in the tiniest amounts of time. Millions died and thousands came back to lead a life of mental and physical trauma. We saw for the first time the industrialisation of warfare; tanks, planes, machine guns and chemical warfare. A young officer in World War One in the trenches had a life expectancy of six weeks. A lasting memory for all of us is probably that symbolism of the British War Graves cemeteries located all around the world. They are exactly the same and that makes the scale of the loss even more profound.’

Cdt Amelia Sulch read an extract from ‘For the Fallen’ by Laurence Binyon, before the Last Post was played and two minutes’ silence was observed by students and staff.

Earlier in the week CCF cadets from the Academy had also taken part in a Remembrance Parade, watched by parents, senior Academy leaders and the CEO of the Brooke Weston Trust.