Well done to the intrepid Brooke Weston team that managed to complete a 100km walk raising thousands of pounds for The Alzheimer’s Society.

Jamie said: ‘The last 10km was very hard and the most hilly part of the entire walk! It was horrendous! We all hit a wall around the 93km point so it was quite an experience!’

The race started at 7.45am from Richmond Park and ended more than a day later on the south coast. In the process the team raised over £2,500 for The Alzheimer’s Society. ‘One of the high points for us and about 1,000 other people was that there was an ice cream van around the 20 mile point! The atmosphere at all the stopping points was very welcoming; there was great food and medical provision. 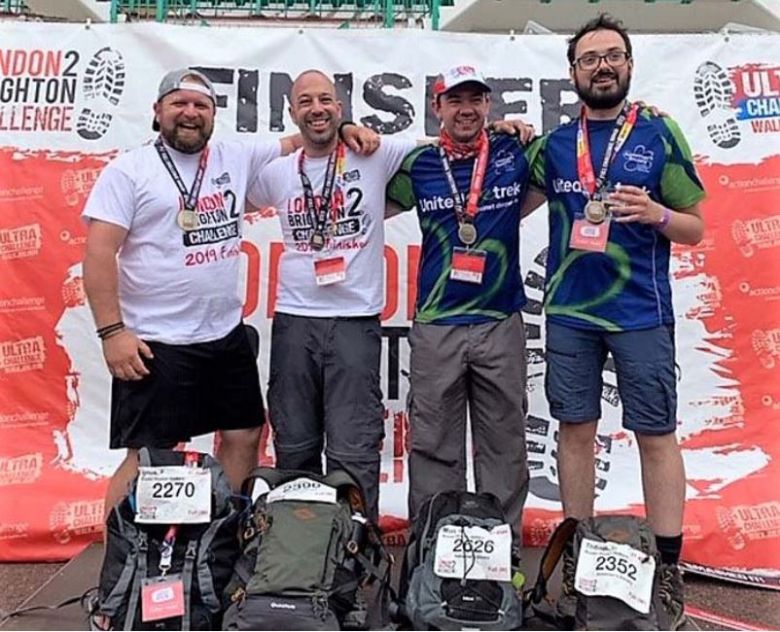 ‘The final 5km of both the first and second halves were very challenging, both physically and mentally. In the night stage the camaraderie kept us going. It helped that we all did the walk as a group and had team spirit, it really made the difference. By about 80km I was getting fed up and the last 8km were just a battle of wills.

‘The last 800m felt like it took forever. That is where the camaraderie came in and we all crossed the finish line together. We celebrated then slept for about 14 or 15 hours. It is the hardest thing I have done by far.

‘I will definitely do other long walks as this has sparked something. I like the goal setting, the drive to look after myself and the challenge is to maintain my fitness level.’

Ignus said: 'We all had our part to play and at some stage of the challenge each of us had to rely on the other. Matt has taught me so much about British history on our walk, Tom always had some sugar in his backpack if the energy levels needed a top up and Jamie kept us focused and motivated. Also thanks to all the support from South Africa, messages from friends and family kept me going when the feet wanted to stop. My aunt tracked us all through the walk and kept a candle burning in support for 30 hours and 12 minutes. I am humbled by the experience and already thinking about the next challenge. Jamie, Matt and Tom - big thanks again.'

Tom said: 'This was physically the hardest thing I've ever done. I was okay until 92km, then the pain and fatigue hit in one wave. It took until around the 96km for it to pass, and I don't think I'd have managed without the support of Jamie, Matt and Ignus. The food stops, particularly the pic'n'mix stop, were totally worth it! Each stop had something different, to cater for different times of day. Action Challenge, who organise the event, run nine different 100km ultramarathons throughout the year in different locations. I would definitely look to do a couple more, hopefully next year.'

Jamie has already hit his fundraising target so if you would like to support The Alzheimer’s Society then please visit Matt or Tom’s JustGiving pages.