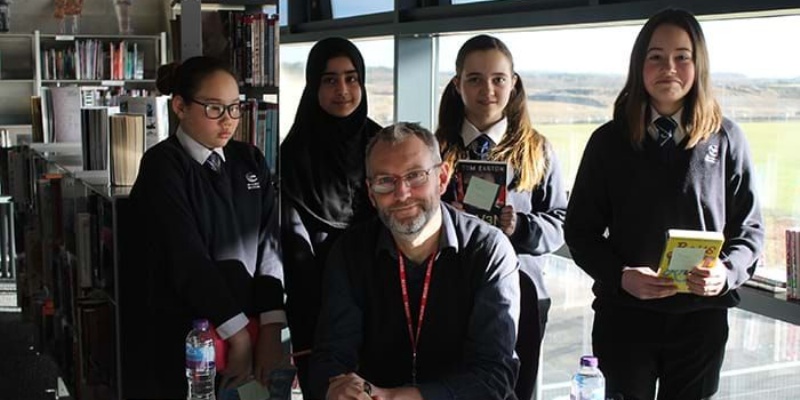 A group of Year 7 and 8 students were invited to Corby Business Academy to attend a talk given by author T S Easton who talked about his books and gave students an insight into the writing process.

During the morning he talked about his latest book ‘Girls Can’t Hit’ a funny, feminist teen story about knowing when to train and when to fight, which he launched at his local boxing club where he had researched information for the book and characters. He offered three pieces of advice to students who are keen to get into writing which were to be patient, try writing different types of stories and to try writing with different voices.

Librarian Ms Wendy McCabe said, ‘It is always a fantastic opportunity for the students to meet an author and a few of our students had read some of Tom’s books which made it even more exciting to meet him. He gave some good advice about writing and encouraged those students, whose dream it is to become authors, by telling them that if he could do it then so could they.’

Year 8 student Anna Bredenkamp said ‘I really enjoyed meeting Tom, my favourite part was when he was telling us boxing jokes, they were really bad jokes but that made them even funnier.’

Year 7 student Daisy Cook said, ‘I enjoyed watching the video clip of Tom speed knitting. He said he could knit a jumper in an hour and on the video it looked like he had actually done it but the wool he was knitting with at the start was a totally different colour to the jumper at the end of the clip.’