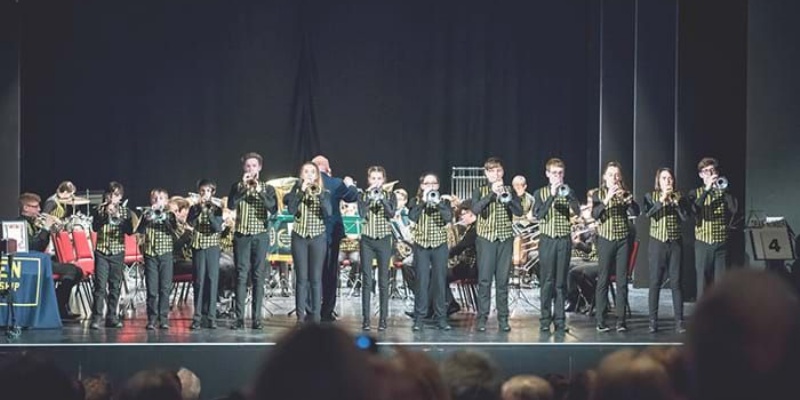 Congratulations to three Brooke Weston students Daisy (Year 8), Joe (Year 9) and Max Oram (Year 10) who competed with Youth Brass 2000 (YB2K) in the British Open Youth Contest in Lancashire and came away as the British Youth Champions 2018.

The siblings have been playing their brass instruments since Year 4 and are members of two local Adult Brass Bands in addition to taking peripatetic lessons outside of school.

Having started contesting with Corby Silver Band in 2016, they were part of the winning band at the Regional Contest in March, meaning that the band went on to represent the Midlands in the National Championships in September.

As a consequence of this success and their development as contesting players, they were invited to join Youth Brass 2000 (YB2K). The group consists of 35 students from across the country up to the age of 19 who rehearse once a week with Artistic Director Lord Chris Jeans, travelling from as far afield as Yorkshire. They compete at National and International level and are current British Champions and second in Europe, which brings with it a whole host of incredible opportunities.

Daisy said, ‘I really enjoy being a member of YB2K as I get to be with people the same age as me who have the same interests. It is really nice that my brothers are in the band as well. Max and I play the cornet and Joe plays E flat bass. We all have our own friendship groups but it means we get to spend time together as a family and experience some amazing things together. It is so exciting that we are now the British Youth Champions as it means we are invited to play all over Europe. We are going to the City of Culture in Holland to play for four days in the Summer and have been asked to play at Disney Land in Paris and Lake Garde in Italy, which are incredible opportunities and I am really excited and grateful that I am fortunate enough to be part of the group.’

The band will be performing a local concert at the Corby Cube theatre on 25 March and again in a double bill with the legendary Brighouse and Rastrick Band on 7 July.

If any students are interested in joining, or just want to find out more, you can visit their website below.