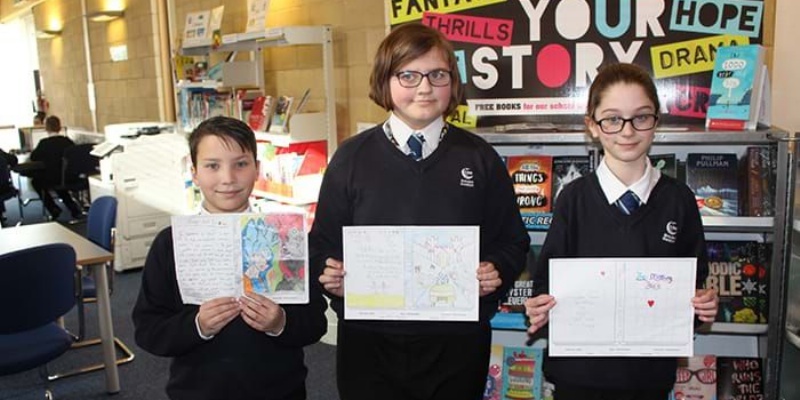 Students from Years 7 and 8 had to design a cover to be in with the chance of winning a book of their choice from those available at the Book Fair. They could design a cover for a book they had read or an imaginary book made up by themselves, the only criteria being that the cover needed to be colourful, intriguing and eye catching and include information about the book, title and author’s name on the spine.

Head of art, Jenny Strydom judged the competition and said ‘I was extremely impressed with the standard of entries and had a tough time choosing just three winners. Well done to all three of the winners and to everyone who took part in the competition.’

Ashton McDonald said, ‘I feel great that I have won the competition as this is the first thing I have ever won. I based the cover on my favourite television programme.’

Ellie Maguire said, ‘I feel extremely happy that I won as I didn’t think I would win. I decided to do my cover on the story ‘Our Day Out’ which we are reading in English at the moment. I thought there should be more information on the front cover about what the book is about to give readers more of an insight into the story before they read it.’

Niamh Sayer-Brown said, ‘It feels good to win. I read a lot of books based on relationships so I wanted to do my cover about a book called the ‘Missing Piece’ The book was about two people who didn’t realise that they liked each other so I decided to draw a jigsaw puzzle as my front cover.’