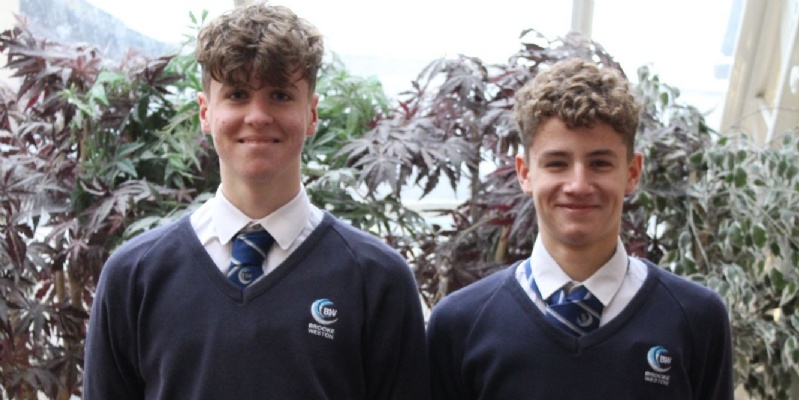 Congratulations to Year 10 Brooke Weston students, Brayden Billington and Theo Marshall, who have both been successful in their recent county trials with Northants Cricket Club U15’s and have been selected as part of the final fourteen to play for the team from hundreds of boys who applied. They are now both training at county level every Sunday whilst still playing at club level several times a week.

Brayden, who has been playing cricket since he was eight years old, currently plays for Kettering Town Cricket Club for the under 15’s, 17’s, and 19’s as well as the men’s team. He said, ‘Now that I’ve been selected to play for the county I’m also eligible to play cricket for the higher age groups. I would describe myself as an all-rounder as I perform well at both batting and bowling. My ambition is to play professional cricket for England in the future’

Theo, who started playing cricket at Desborough Town Cricket Club when he was nine years old, is predominantly a pace bowler. He said, ‘I have played for Desborough Town since I started playing so I've been with them for five years.  I play for the U15's and the Men’s second team and I have also played for Northants County for three seasons as we have to re-trial for the team every year. This year there has been a very high standard of players so I've had to work really hard. I'm thrilled to be selected for a fourth season this year. I have also been given a place in the Northants Centre of Excellence, which prepares players for the Emerging Player Pathway squad which is for players who have the potential to become professional players. Cricket is a great team game and I love playing.’