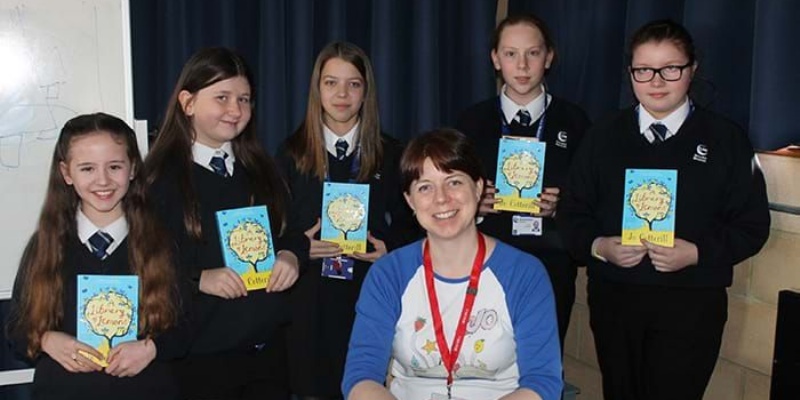 Students at Brooke Weston invited award winning author Jo Cotterill into school to speak to Year 7 students and deliver a creative workshop with a small group of Year 10s.

Jo has written 37 books as Jo Cotterill and also some under her alias Joanna Kenrick for older teens. Her books have won several awards and she has been nominated for the Carnegie Medal twice for ‘Looking at the Stars’ (2015) and ‘A Library of Lemons’ (2017).

During the morning she gave an interactive presentation to Year 7 where she explained her love of reading and how she wrote her first story ‘The Christmas Tree’, as a Christmas gift to her Grandparents when she was almost six, which she read and showed to the students.

Jo said ‘‘I think if someone is meant to be a writer, they will find a way somehow. Reading and writing are both important but taking criticism is important too. When it boils down to it, if you want to do something passionately enough, the only person who can make it happen is you.’

She explained that as a writer, it is extremely important to do extensive research for your book. Whilst researching for the ‘Electrigirl’ books she visited a power station and learnt new facts about electricity that helped with the development of the characters and plot. Jo demonstrated her new found knowledge by asking volunteers to step to the front of the stage and become an electric circuit, which involved a very loud student battery and students keeping electrons moving around a circuit to keep a switch on.

In the afternoon a small group of Year 10 students discussed complex social issues that affect many young people today and then created a powerful piece of writing from the discussion.

Librarian Ms Wendy McCabe said, ‘Jo was an instant hit with the students from start to finish, they were engaged and on the edge of their seats. Her background in performing and teaching really shone through and gave everyone a day to remember. I am looking forward to receiving her new book ‘Jelly’ in the library when it is released in June.’

Year 7 student Jasmine Bailey said ‘Jo was great; I liked the fact that she wasn't just talking to us about stuff but got us involved. She was very funny and I particularly enjoyed reading ‘The Christmas Tree’ story.

Year 7 student Catherine Darroch said, ‘Having us take part as the electricity circuit really helped explain how electricity works and definitely made the talk more exciting and memorable.’