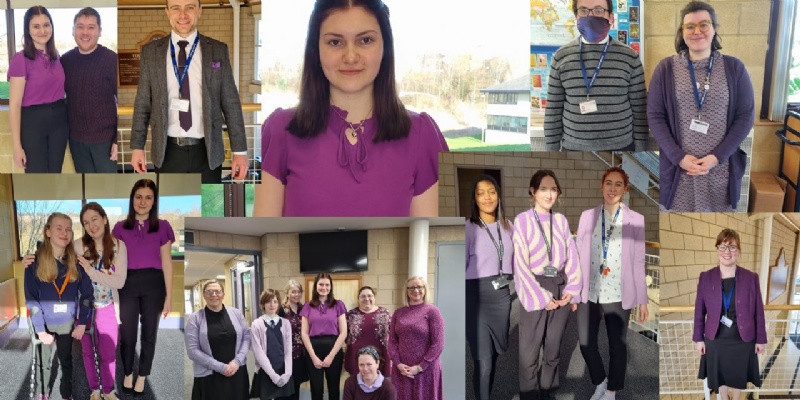 Well done to Brooke Weston SEND/Student Support Teaching Assistant, Libby West, who organised a fundraising event at the end of last term as part of National Eating Disorders Awareness Week; an annual campaign to educate the public about the realities of eating disorders.

Staff and students were invited to wear an article of purple in return for a donation to BEAT, the UK’s eating disorder charity, with a total of £243.25 raised. Around 1.25 million people in the UK suffer from these illnesses, many in secret. They are of all ages, genders and backgrounds – eating disorders do not discriminate.

Libby said, ‘Initially I wanted to purchase a purple eating disorders awareness pin just for myself, however, I found that I could only buy a box of 50 so decided to see if I could sell them to staff and was overwhelmed with the response; they were all sold in a week! I was also given permission to hold a ‘Wear Something Purple Day’ allowing staff and students to come into the academy wearing one thing purple for a donation towards BEAT.

I chose to fundraise for BEAT because eating disorders are a devastating mental illness. Statistics show that many of the sufferers are students in schools and it is highly likely that we will all come across someone with an eating disorder at some point during our lives and we should know how to support them when we do. To raise awareness I have put a display board up outside the SEND department that shows the various types of eating disorders, with the different helplines and support that are available, symptoms to look out for and common misconceptions. I would like people to know that no matter what they are going through or feeling that they have places to go to for help, in school and out.

It’s wonderful that we have done some fundraising for this cause at the Academy as it means BEAT will have more money to put towards research, staff, helplines and many other kinds of support. Thank you so much to everyone who has bought a pin and donated, the awareness being raised and action taking place is amazing.’