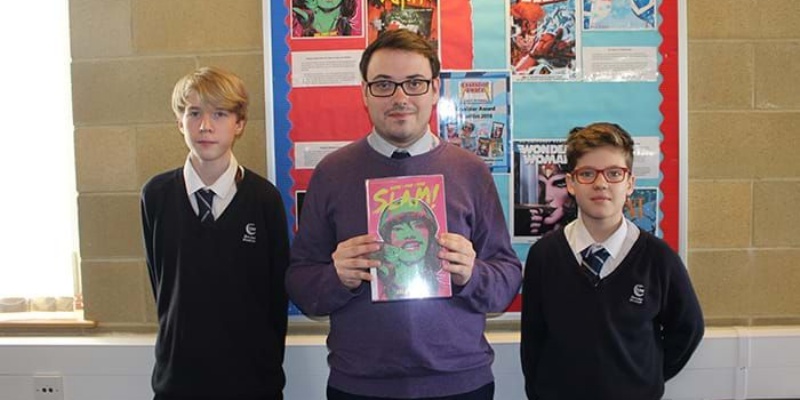 Students in Graphic Novels club are taking part in the 2018 Stan Lee Excelsior Awards scheme, which aims to encourage reading for pleasure amongst students and to promote the significance of graphic novels and manga.

The awards have been running since 2011 and began to complement the Sheffield Children's Book Award. However, other schools across the UK heard about them and requested to join in. Popularity has since exploded and it is now a major national event across schools and libraries.

Each week students from the club will withdraw one of eight books which this year include, ‘Coady and the Creepies’, ‘Batman – Vol.4 The War of Jokes and Riddles’ and ‘Slam Vol.1’ and using an Excelsior Award rating form, they will rate it according to story, artwork, characters and dialogue. This will continue every week until mid April. This process will result in the shortlist being narrowed down to first, second and third with the winning titles being announced at a special awards ceremony in June. The school which returns the most ratings forms will also win an award called the 'True Believers' Award.

Library Assistant Tom Holton runs the Graphic Novel club on a Friday during tutor time. He said, ‘We started Graphic Novel club so that like minded people had a place to go to share their thoughts and ideas about graphic novels and manga. I asked the group if they would like to take part in the competition and they all thought it was a fantastic idea. The scheme is great because it allows us to read some diverse and mixed books that we might not normally have chosen to read.’

Year 9 student Callum Slattery said, ‘I wanted to join the club because my sister helps to run it and I like comics, so I thought it would be a good idea. I started really enjoying it and now the competition has come up I am very excited. I’ve only read two books so far and I like ‘Trent’ the most because it was different from what I usually read which is manga.’

Year 8 student Ellis Watkins said, ‘I am really interested in super heroes and comic books and people told me Graphic Novel club would be a good way to get more involved with that. I have only read two of the books from the competition so far and at the moment my favourite is ‘Coady and the Creepies’. It had a good story line and cool characters and it was not your generic comic.’

Graphic Novel club is open to students in all years. If you are interested in joining please contact Tom Holton in the Library.