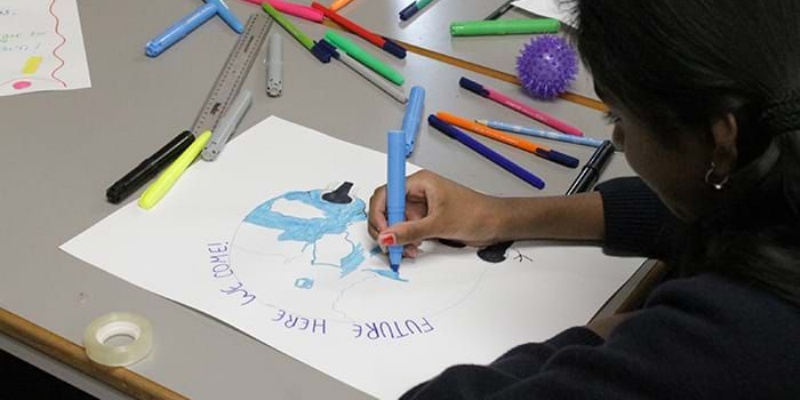 Students in Year 7 took part in a Trust ‘Believe Big’ day in conjunction with 7billionideas, an initiative to generate ideas that could change the world and build students’ confidence in delivering presentations.

The whole of Year 7 took part in the entrepreneurial competition where students got to chose a team name and slogan, design a poster and produce a prototype and presentation for their concept.

Eight finalists were then chosen to present their ideas to the rest of the school, where the final three will be chosen to represent Brooke Weston at the Trust grand final at Rockingham Speedway on 20 March. The winners will receive certificates, T-shirts and goodie bags and will be asked to create a stall to showcase their work to the judges. The overall winning idea will be turned into a children's book and go live on Amazon.

Vice Principal Rebecca Waterson said, ‘This was a fantastic opportunity for the students to have a day of pure creativity and to let their imaginations run wild. Students were able to work with their tutor groups, create bonds with their tutors and fellow students and develop key life skills such as team building and communication. It was a day where there was no glass ceiling and they could do something fun, imaginative and lovely for the world.

‘The ideas that they created were so thoughtful and included concepts around dementia, autism, environmental ideas, a robot dog for the blind, and a buddy backpack to help prevent bullying. All of the ideas were student centred and world focused. All teams came up with really genuine and thoughtful ideas.’

Year 7 students Emilia Wright and Libby-May Yates created an idea for a robot dog for the blind. They said, ‘So many people need guide dogs and they cost so much to train and there is a huge waiting list, so we thought we would make a robot one which, unlike a real dog, will last forever.’

Year 7 students Jasmine Bailey, Tyler Green, Catherine Darroch and Sofia Muhammad came up with a water purifier, they said. ‘Our teacher told us about the droughts that are happening in Cape Town and we thought how horrible it would be to go days and days without water. We looked at pictures of Cape Town and saw that it was a beautiful place surrounded by water and that is when we thought about taking seawater and purifying it to drink and bathe with.

‘We had a basic idea and then worked as a team to build on it from there. Originally it was going to be a purifying pump but then we modified it to be a tube under water from the ocean and it built on from there. We worked so well as a group together with an amazing idea creating great additions for it.’

The finalists that will go through to the final will be announced tomorrow.