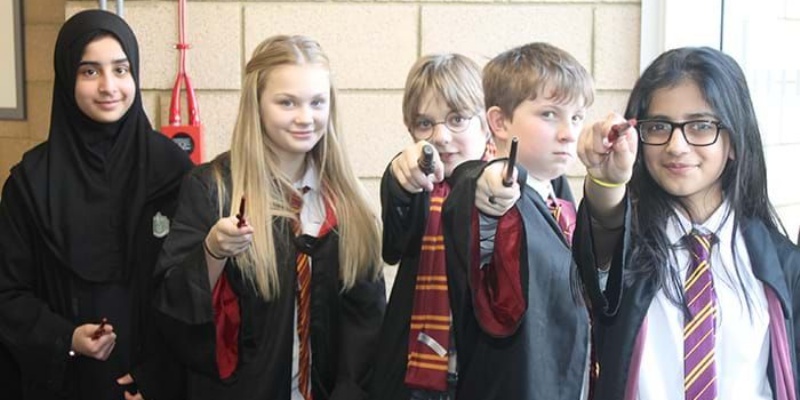 A group of Brooke Weston Harry Potter fans were invited to take part in a celebration of J K Rowling’s unforgettable series of books at an event that was held at Corby Business Academy.

Students and staff dressed as characters from the books, which included appearances from Professor Trelawney, Rita Skeeter, Dobby, Bellatrix Lestrange, a Golden Snitch and of course Harry Potter himself.

A number of activities took place throughout the afternoon, which included a sorting ceremony, chocolate coin hunt, potions lesson, Quingo – a cross between quiddich and bingo and a Harry Potter Quiz which Brooke Weston student Zahra Khan won a prize for for the most questions answered correctly from Brooke Weston.

At the end of the afternoon prizes were awarded for the winning house which was Slytherin, into which Brooke Weston students Matty Smith and India Farrar had been placed, each winning a Harry Potter HoneyDukes Chocolate Bar. Brooke Weston student Fraser Hewitt and Librarian Ms Wendy McCabe also won prizes for their fancy dress costumes. Ms McCabe said, ‘Harry Potter Book Night is a fantastic way to keep the magic of Harry Potter alive and to pass that magic on to young readers who haven’t yet discovered this wonderful series of books. The students had a great time at the event and mixed well with all the other Harry Potter fans from the other schools who attended the event.’

Year 7 student India Farrar said, ‘The whole afternoon was great fun, I loved every minute. I had to taste the disgusting potion we made and it was horrible, sweet and sickly.’

Year 7 student Shyria Khunti said, ‘I really enjoyed it and it was great to meet up with other students. The best part for me was the coin hunt’

Year 9 student Fraser Hewitt said, ‘ I had lots of fun, I was happy that I won a prize for my Harry Potter costume’