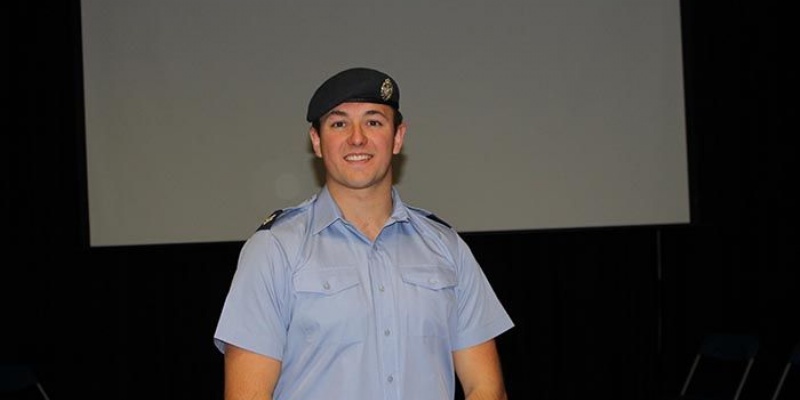 Former Brooke Weston student Charlie Mawby returned to Brooke Weston this week to give a presentation about life in the RAF and to answer questions about a career in the armed forces.

Charlie, who left Brooke Weston in 2009 and is now a Medic in the RAF spoke about his career route into the RAF and his experiences so far. He said ‘I’m a Medic in the RAF which consists of a range of jobs from combat first aid to soldiers on operations to coordinating sick military patients in UK hospitals. When I left Brooke Weston after my A Levels I applied for the RAF but wasn’t successful and had to wait two years before I eventually joined in 2011. I love working in the RAF and being a Medic as I feel I make a real difference. I have served all over the world in a range of environments from sea to desserts and snow to the jungle with tours lasting anywhere between two weeks to six months.

‘The armed forces offers so much opportunity. They will pay for you to further your education if that is what you want to do. I took an Economics GCSE at 25, as I was interested in learning more about business. The money is good, expenses are low and you get lots of leave. I honestly think it is amazing and everyone should join up!’

Charlie’s ambition since he was five years old was to be a pilot in the RAF, but when he was in Year 7 he received a call that shattered his dream ‘I can’t remember a time when I haven’t wanted to be a pilot, but I was told that I couldn’t fly because I wore glasses and I was heart broken. I didn’t give up though and my parents encouraged me to still join the RAF and I’ve never looked back. I’ve now had my eyes lasered and so finally I have been accepted to start training as an Officer in August and later in the year my pilot training, which will take years to complete but is thoroughly worth the wait to finally achieve my dream’

‘When I was at Brooke Weston I wasn’t naturally gifted or clever but it was my dream and passion that got me through. The motto in the school was ‘Good enough is never good enough’ and although I didn’t realise it at the time it really is true. The teachers here were interested and passionate about all the students and I loved my time at Brooke Weston and would send my own children here.

To join the RAF you need five GCSE’s at C or above and these must include Maths and English. Officers need at least two A Levels or equivalent but these can be taken once you have joined as the Military will pay for you to learn.

‘If students are interested in joining the RAF the best thing to do is to speak to the local AFCO - Armed Forces Careers Office or the Brooke Weston school careers advisor who will put you in touch with the AFCO as they will have the most up to date information. You should also join the Air Cadets and fill your time with different experiences, such as charity work or the Duke of Edinburgh as it looks good on your application, will make you a better service man and separates you from the rest.’