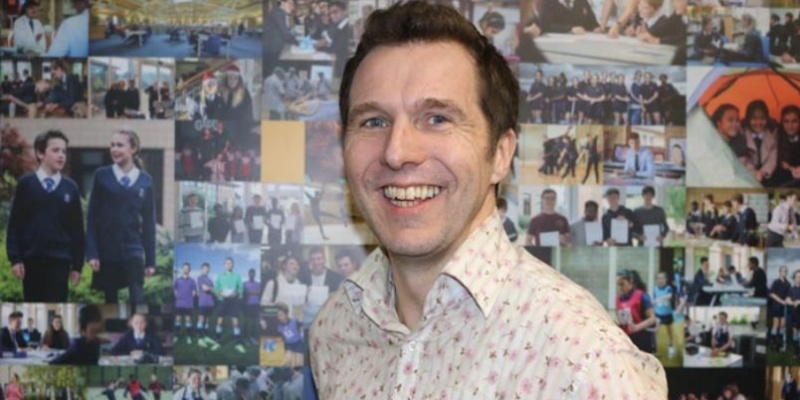 Author Christopher Edge spoke to Year 7 and 8 students about his books and led writing workshops encouraging them to write their own compelling first lines.

Christopher has had 15 books published, including The Infinite Lives of Maisie Day, The Many Worlds of Albie Bright and The Jamie Drake Equation: ‘Other authors start their books with chapter one. I don’t do that. The Infinite Lives of Maisie Day starts with chapter zero …’ His books are inspired by science including quantum physics, the big bang and multiple alternate realities. He bombarded the students with facts about space, dark matter, dark energy, black holes and many of the other topics that are woven into his books:

‘Maisie is in her kitchen and she sees her kitchen start to explode in a mini big bang. She finds what looks like a black hole in the bathroom of her house and the only clue Maisie can find, to try and explain what is 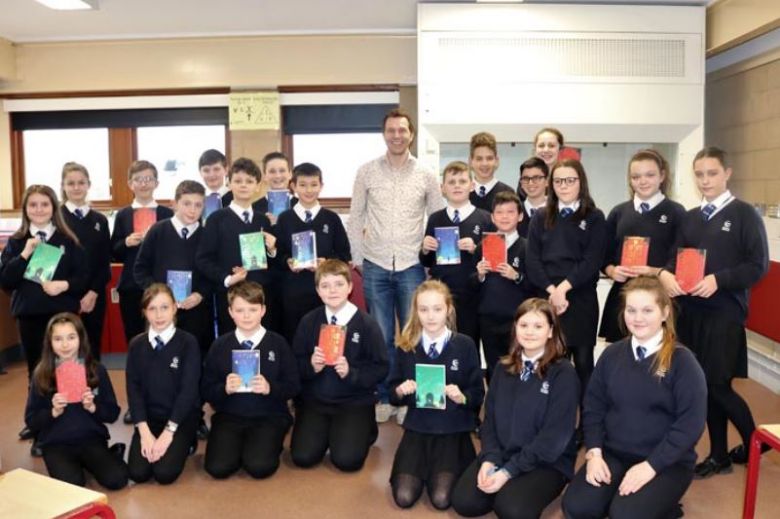 happening, is a picture she sees on the television screen in her living room. It is a red balloon floating up into a clear, blue sky and Maisie has got to try and find out what this image means, what has happened to her family and will she ever get to see them again?’

He also spoke about The Many Worlds of Albie Bright: ‘It is about a boy who loses his mum to cancer. His mum and dad were both scientists. When he questioned whether his mum was in heaven his dad said that with quantum physics there are parallel worlds out there that might be filled with different realities, so he goes in search for her. The book is about how far would you go for love?

The Jamie Drake Equation is about a boy whose dad is an astronaut working on the International Space Station searching for alien life. Jamie, on earth, really misses his dad and meets an astronomer who has hacked into the Hubble space telescope to look for signs of alien life. It’s a story about science, space and family.’

Chris inspired the students to write their own stories, which will be submitted into the 500 words competition.

He also talked about his writing career: ‘My first book was published in 2011 but the first book I wrote was when I was four years old! I have always loved books, did an English degree, was an English teacher then went to work in publishing. I used to be a big planner, almost chapter by chapter. Nowadays I still plan but I kind of have a character and a situation. I usually have the penultimate scene in my head and know what the emotional arc of the story is.

'My first book was a supernatural conspiracy thriller and my early ones did well and won prizes, but The Many Worlds of Albie Bright, which came out in 2016, was the one that took me to the next level. I am very keen on demystifying writing. Lots of children judge themselves by the books they read on the shelf and forget that those are polished things. A blank sheet of paper can be very intimidating, but starting is the thing. I look at techniques and where we can find inspiration for stories.

'My children’s books deal with big ideas, like grief. It’s a real honour to create something that can help someone to look at the world differently and cope with things that the world throws at us.

You have the most freedom as a writer when you write for children. They are not a cynical audience, they are readers that will go with you anywhere. When you read as an adult you want to be entertained, when you read as a child the stories can help you understand the world around you, or escape from it. Hopefully they might even inspire you to build a better world.’